The purpose of this chapter is to explain the history of sunflower domestication and breeding, with special attention to the extremely valuable role of wild relatives in sunflower crop improvement. Sunflower is one of the few globally important crops with origin and center of diversity in North America.

Sunflower (Helianthus annuus L.) is one of the few major food crops that was domesticated in what is now the United States. Although its center of origin was in the U.S., early improvement of the crop occurred in Russia. Sunflower is now an important source of oil, seeds for snacking, and bird feed, in addition to being a popular garden ornamental. It is grown commercially in 72 countries and covers over 23 million hectares (Seiler et al., 2017). Wild sunflower relatives have been an important source of variation in sunflower since the early 20th century.

As described by Dr. Laura Marek in the video that follows, wild sunflowers are widely distributed across North America, including in nearly every state in the U.S., as well as Canada and Mexico. The distribution of wild sunflower taxa across North America is shown in Figure 1, and some example are shown in Figures 2-7. Habitats of wild sunflower relatives are extremely diverse, and include grasslands, forests, swamps, deserts, roadsides, and farmers’ fields (Seiler et al., 2017). 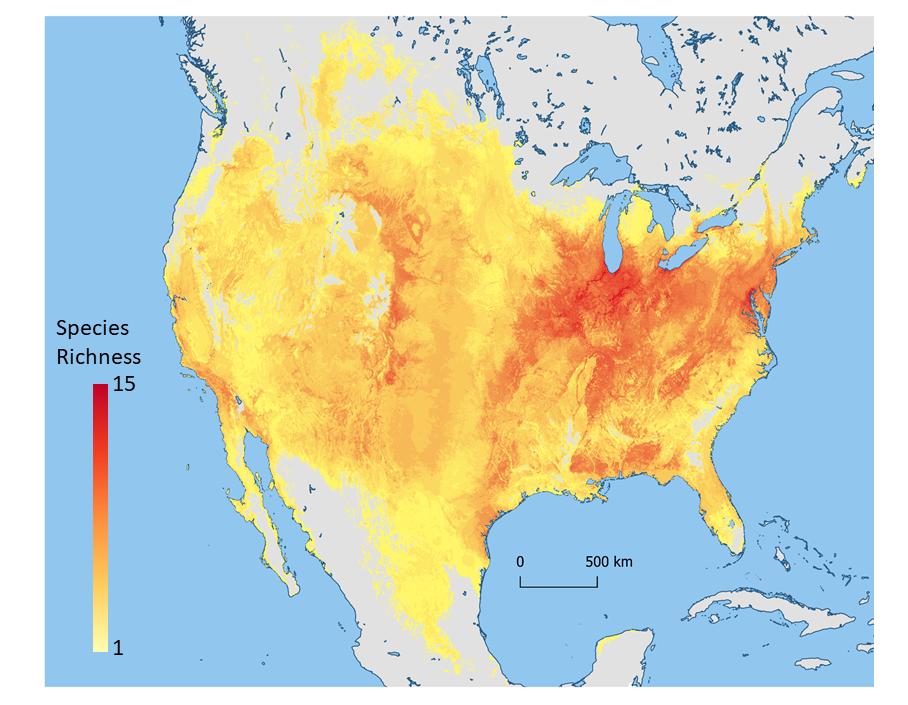 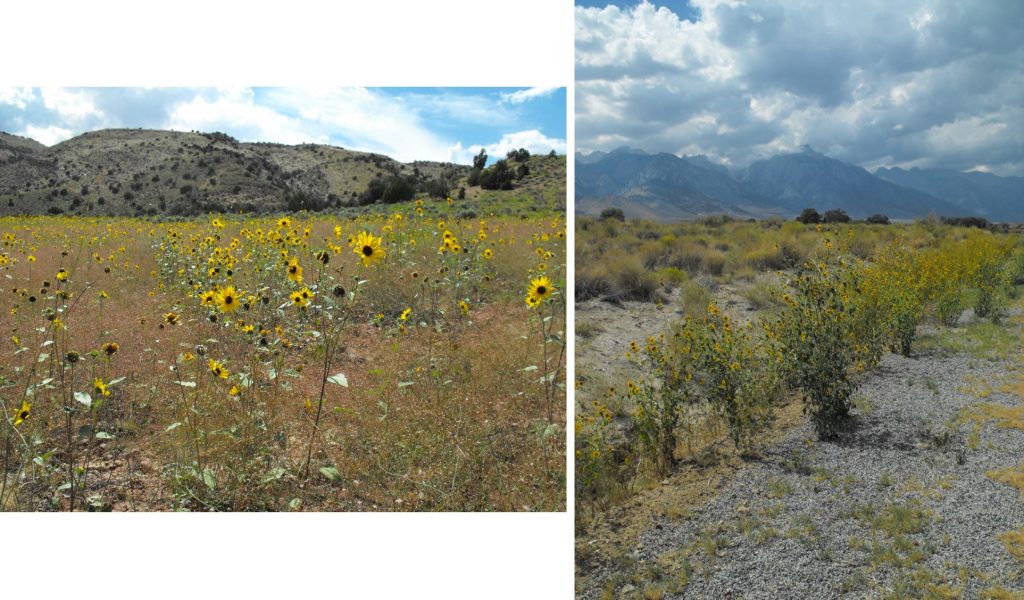 Figure 4 (left). Helianthus niveus ssp. niveus, growing in dunes along the Pacific Ocean west of Vicente Guerrero, about 95 miles south of Ensenada, Baja California. This annual species occurs only in Mexico, and is the only Helianthus taxa unrepresented in the U.S. National Plant Germplasm System. Photo credit: Laura Marek.

Figure 5 (right). Helianthus radula growing in a field plot in Parlier, California.  This species typically does not have sunflower’s typical bright yellow ray flowers, although occasionally a population will have plants with rudimentary rays, as shown in this image. Photo credit: Laura Marek. 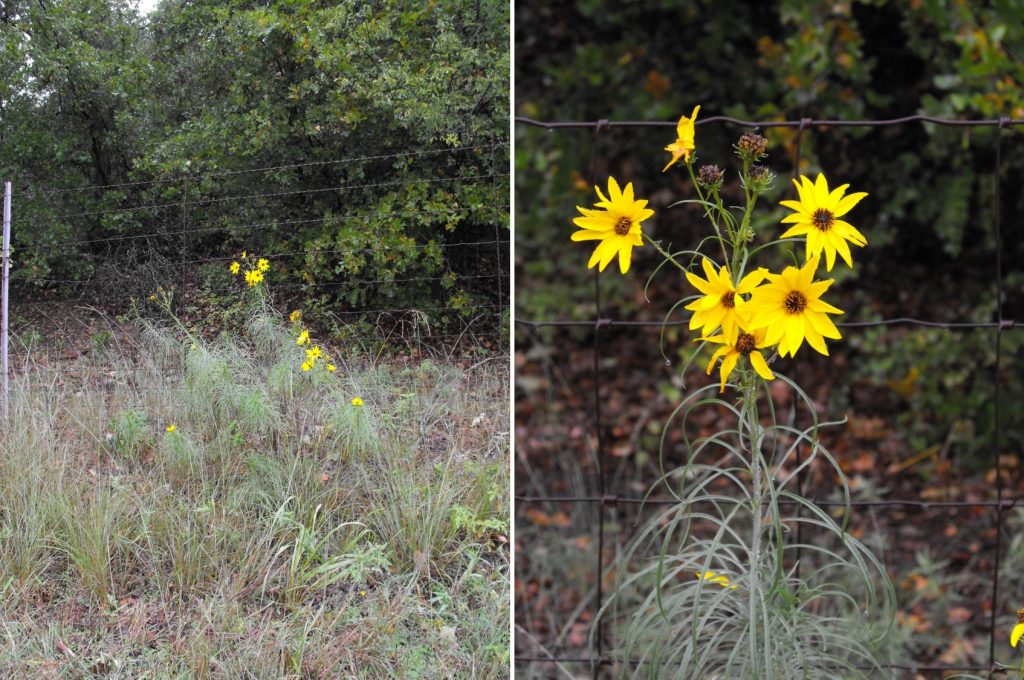 Figure 6. Two views of Helianthus salicifolius north of Lake Lawtonka, northwest of Lawton, Oklahoma. This is the southernmost collection location of this perennial species, which has unusually narrow leaves.

In the two following videos, Dr. Marek explains conservation of wild sunflowers in the USDA National Plant Germplasm System and in in situ reserves. 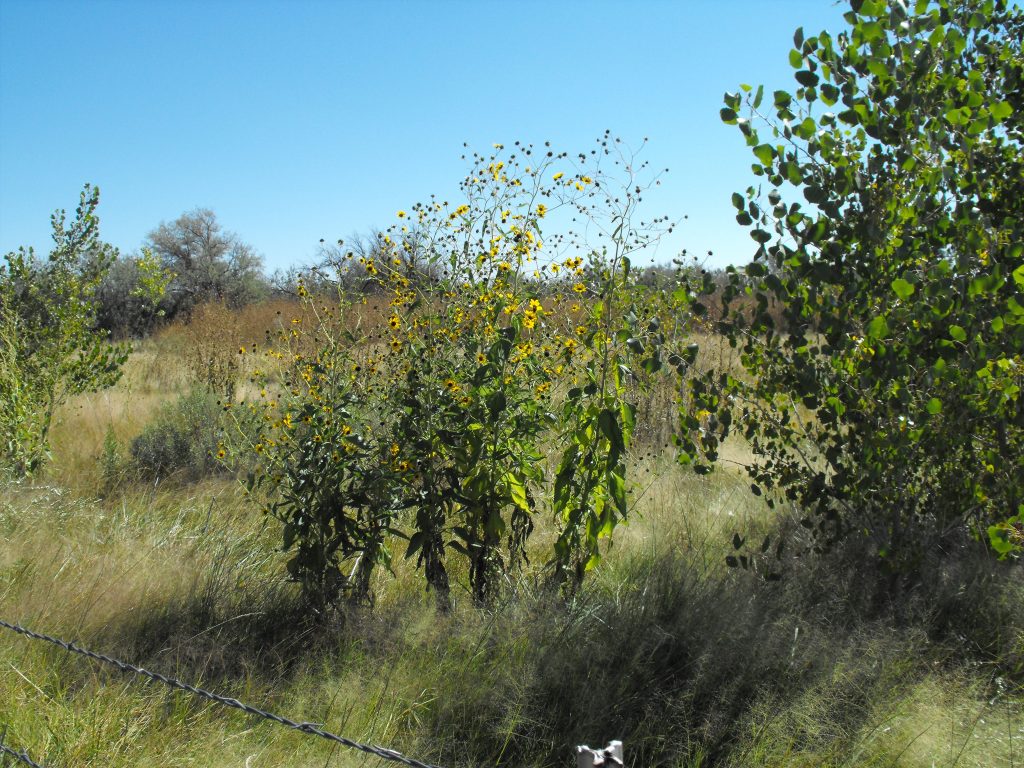 4. Domestication and early improvement of sunflower

Domestication of sunflower is believed to have occurred 4000 to 5000 years ago in the east central U.S., with the oldest archeological evidence coming from a site in Tennessee (Marek, 2019; video 4). Among the important domestication traits were an unbranched stem supporting a single large flower head with large seeds that stayed in the head after maturity (non-shattering) (Marek, 2019). Some of these differences are shown in Figure 8. Native Americans spread domesticated sunflower across the continent, including into the southwestern U.S. and Mexico. Native Americans ate the seeds directly, as well as grinding them into meal and extracting oil (Marek, 2019).

Sunflower was first introduced to Europe by Spanish explorers, followed by the French and English (Seiler et al., 2017). It was grown mostly as an ornamental and later as a forage, but became a major oilseed crop after arriving in Russia. The Russian Orthodox Church prohibited many oily foods during Lent, but since sunflower was not on the list of forbidden products, it was allowable in the diet. High-oil Russian varieties with oil content greater than 40% were developed to meet the need (Seiler et al., 2017). The North American sunflower industry was based on these high-oil Russian varieties as the crop transitioned from a forage to an oilseed species.

5. Use of wild relatives in sunflower breeding

Sunflower crop improvement is unusual in that wild relatives were used right from the beginning of scientific breeding early in the 20th century and continue as important sources of variation today. In the video that follows, Dr. Marek discusses the history of using wild relatives in sunflower breeding and some of the traits that have been improved. Figures 9-14 show several wild species that have been sources of economically important traits.

The parasitic plant Orobanche cumana is a serious constraint to sunflower production in many regions, though not yet in North America. Resistance to this weed was first identified in H. tuberosus and incorporated into cultivated sunflower. Later as O. cumana overcame the resistance from H. tuberosus, resistance in several other wild taxa was identified and incorporated in breeding programs (Seiler et al., 2017).

A major milestone in sunflower breeding was the discovery of cytoplasmic male sterility in H. petiolaris and corresponding fertility restorer genes in several wild species (Marek, 2019). Together these enabled the development of hybrid cultivars, with their increased yield, yield stability, and uniformity.

The use of wild sunflower relatives for additional traits (herbicide resistance, salinity tolerance, drought tolerance) is described in Marek, 2019 and Seiler et al., 2017.

Figure 9 (left). Uncaged field plot of Helianthus argophyllus, a wild annual species from which rust and downy mildew resistance have been transferred to cultivated sunflower. Cages or isolation tents, as shown to the left of the photo and in Figure 12, are used to prevent cross-pollination when harvest of pure seed is desired. Photo credit: Laura Marek.

Figure 11 (left). Helianthus debilis ssp. tardiflorus on the beach on the south side of Seahorse Key, south of Cedar Key, Florida. This is the species from which modern sources of resistance to Orobanche cumana, parasitic plant pest of cultivated sunflower, were obtained. Photo credit: Laura Marek.

Figure 12 (right). Helianthus tuberosus growing in a cage (isolation tent) in Ames, Iowa to prevent cross-pollination. This is the species from which resistance to Orobanche cumana  was originally transferred. Photo credit: Laura Marek.