The purpose of this chapter is to explain how wheat originated in the Fertile Crescent of the Middle East, and how knowledge of wheat’s ancestors informs strategies for continued improvement of the cultivated crop. Wheat is an example of crop evolution through hybridization of wild species, which has led to a bottleneck in genetic diversity. Through access to collections of wild relatives, wheat scientists have helped overcome that bottleneck.

The domestication of wheat (Triticum aestivum L.) from wild grasses in the Middle East is a fascinating story that resulted in one of the world’s most important and widespread crops. It is estimated that wheat provides about 20% of the energy in global diets and about the same percentage of protein (WHEAT, 2014). Wheat is primarily a cool season crop, but is broadly adapted to many types of growing conditions, both irrigated and rainfed, and is especially important as a staple crop in semi-arid conditions. Part of wheat’s adaptability is due to the fact that it occurs both as winter habit varieties (requiring a cold period of 6 to 8 weeks to trigger reproduction), and spring habit varieties (not requiring the cold period). Wheat geneticists and breeders have a long history of identifying useful genes in wild wheat relatives and incorporating them into improved varieties.

2. A and B genome ancestors and A x B hybridization

Common wheat is a hexaploid species with three sets of similar but distinct chromosomes. These chromosome sets are designated the A, B, and D genomes, each with seven pairs of chromosomes. Thus, hexaploid wheat contains 3 genomes x 7 pairs = 21 pairs or 42 chromosome total. Each genome originated in a different annual diploid grass species in the Fertile Crescent of the Middle East (Figure 1). 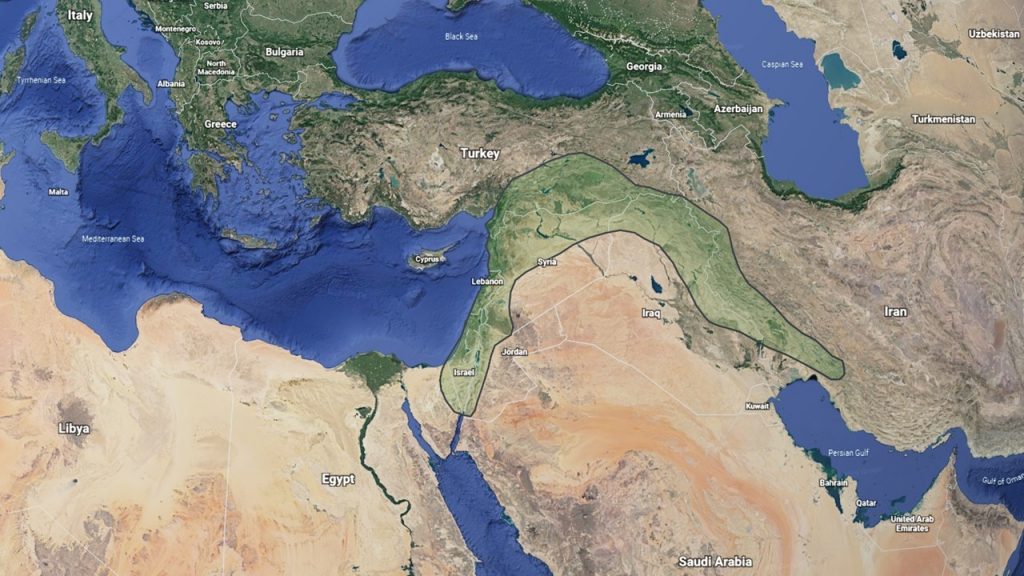 Figure 1. The Fertile Crescent of the Middle East, where wheat and many other crops were domesticated. 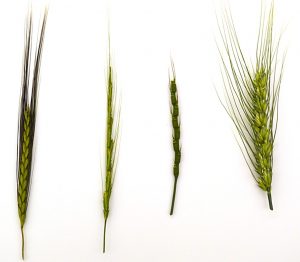 A separate lineage of the A genome led to domesticated einkorn wheat (Triticum monococcum ssp. monococcum), which is still grown in remote parts of Turkey, Italy, and Spain. The genome of this diploid species is usually designated AmAm to distinguish it from the lineage that led to hexaploid wheat.

Video 1. Dr. Patrick Byrne shows examples of the A, B, and D genome ancestors of wheat, describing wheat’s evolutionary history, and explaining how wild wheats are relevant to modern wheat breeding.

Video 3. Dr. Patrick Byrne shows harvested heads of the A, B, and D ancestors of wheat, and explains the strategy of creating synthetic hexaploid wheat to increase diversity of cultivated wheat.

Wheat’s D genome ancestor is the goatgrass Aegilops tauschii, which occurs across a broad range of the Middle East and Asia from Syria to China. DNA analysis of wheat and its wild relatives led Marcussen et al. (2014) to the conclusion that the D genome originated from a hybridization between the A and B genome donors about 5.5 million years ago. Much later, another hybridization occurred between domesticated emmer wheat (AABB) and Ae. tauschii (DD), giving rise to hexaploid common or bread wheat (T. aestivum), with the AABBDD genome designation. This hybridization is believed to have occurred only 8000 to 10,000 years ago, most likely in an area south of the Caspian Sea in present-day Iran (Gepts, 2018). The D genome provided wheat with adaptability to the harsh environmental conditions of Central Asia, as well as proteins that improved the breadmaking properties of the flour.

The hybridization that led to common wheat is believed to have involved a very limited number of Ae. tauschii plants. Thus, the D genome is the least genetically diverse of wheat’s three genomes. The diversity present across the vast range of Ae. tauschii is mostly absent in today’s wheat and until recently has been largely unexplored as a source of useful variation.

A creative strategy for addressing the impoverished D genome diversity of common wheat is the development of synthetic hexaploid wheats (McFadden and Sears, 1946; Trethowan and Mujeeb-Kazi, 2008; Ogbonnaya et al., 2013). This strategy is an attempt to recreate the evolutionary history of wheat by intentionally crossing tetraploid (AABB) wheat with Ae. tauschii (DD), but using a much broader range of Ae. tauschii accessions than occurred in nature. Ae. tauschii is an attractive species for introgression into common wheat, because its genome readily pairs and recombines with wheat’s D genome chromosomes. The International Maize and Wheat Improvement Center (CIMMYT) has been a leader in producing and utilizing synthetic hexaploids, with over 1,500 synthetics developed (Mujeeb-Kazi and Hettel, 1995; Rosyara et al., 2019).

The process of developing synthetic hexaploid wheat is diagrammed in Figure 3. Because the initial product of fertilization between the tetraploid and diploid species is inviable after a few weeks, an embryo rescue procedure must be used in many cases. This involves dissecting out the young embryo and growing it in tissue culture to produce a triploid (ABD) plant. The chromosome number of this plant is then doubled by treating with colchicine to produce AABBDD plants, the same as common wheat. Other methods for incorporating wild species diversity into wheat include direct crossing of Ae. tauschii or wild tetraploid accessions to hexaploid wheat, as explained in Ogbonnaya et al. (2013). 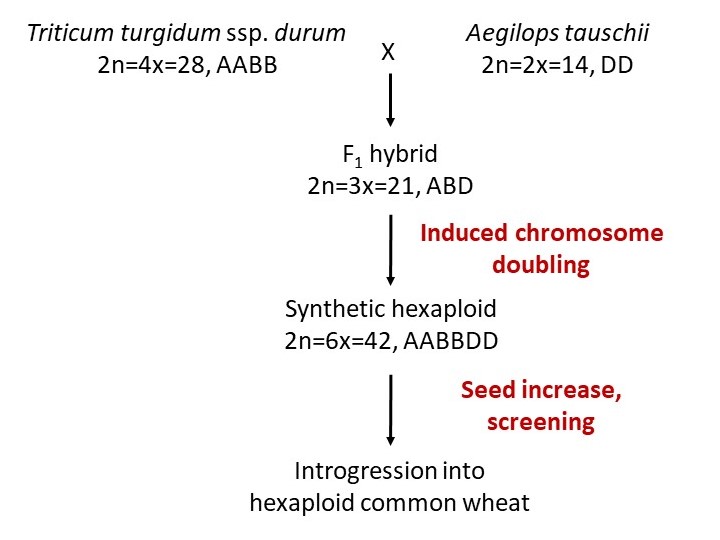 Synthetic hexaploids are not directly useful for wheat production because they are typically not adapted to the target growing area and they express wild species traits, such as poor threshing (i.e., the seeds do not separate easily from the enclosing glume tissue) and excessive lodging (Figure 3). Therefore, the synthetic lines are typically crossed to an adapted wheat cultivar, then backcrossed once or twice to the adapted cultivar, followed by selection. This results in breeding lines (sometimes called synthetic-derived lines) that have mostly adapted genomes with segments of synthetic hexaploid chromosomes interspersed. These lines can be grown and evaluated like normal wheat in hopes of finding improvements in qualitative or quantitative traits due to the inserted synthetic hexaploid segments. 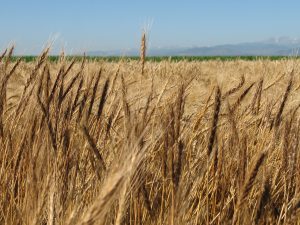 Synthetic hexaploid lines have been shown to be useful sources of variation for abiotic and biotic stress tolerance, as well as agronomic and novel grain quality traits. Their improved yield performance under drought stress conditions appears to be due at least in part to shifts in their rooting profile, whereby a greater proportion of root biomass is produced deeper in the profile (Lopes and Reynolds, 2011; Reynolds et al., 2008).

Another approach to uncovering useful variation in Ae. tauschii accessions is to develop a Nested Association Mapping population (NAM), a method described for maize by Yu et al. (2008). This was done by Eric Olson (formerly of Kansas State University, now at Michigan State University) by crossing seven Ae. tauschii accessions directly to the Kansas adapted wheat line KS05HW14, followed by two backcrosses and several generations of self-pollination. The resulting population of 420 lines (named the DNAM) is shown growing in Video 5.

The Wheat Genetics Resource Center at Kansas State University has been a leader in collecting, conserving, and exploiting wild wheat relatives for crop improvement. Germplasm released by the Center includes breeding lines for disease and insect resistance, bread making quality, and other traits.

In the realm of abiotic stress tolerance, Placido et al. (2013) showed that a chromosome segment translocation from Agropyron elongatum provided wheat with the ability to maintain root growth under moisture stress conditions.

Kishii M. 2019. An update of recent use of Aegilops species in wheat breeding. Frontiers in Plant Science 10:585.