The purpose of this training is to demonstrate the process of micrografting as a method to recover citrus shoot tips after cryopreservation. This training is designed for scientists and technical staff with expertise in micropropagation techniques.

The citrus micrografting procedure is available to download here.

The micrografting method is demonstrated as a series of steps including:

‘Carrizo’ citrange rootstock seeds (PI 150916 x Citroncirus sp.) were selected as the rootstock cultivar because they are available from nursery sources, they produce relatively thick hypocotyls for grafting, and they are compatible with nearly every species of citrus.

Video 1 demonstrates the process of peeling the seed coats off the ‘Carrizo’ seeds and placing the resulting embryos into water containing Tween 20 (1 drop per 100 mL). When all the seed coats are removed, the seeds are rinsed three times with tap water and then surface sterilized by first treating the embryos with 70% isopropanol for 2 minutes and then rinsed three times with tap water. 20% bleach (1.65% sodium hypochlorite final concentration) + Tween 20 (1 drop per 100 mL) is then added to the flask and the embryos are transferred to a laminar flow hood. The seeds are shaken intermittently for 20 minutes while they are in the bleach solution. They are then rinsed three times with sterile water and embryos are transferred to test tubes containing the growth medium Citrus Seed Germination Medium. The embryos in the test tubes are then placed in a dark cabinet in a growth room and grown for up to six weeks before use.

When the rootstocks are at least 3 cm tall, they are ready to be micrografted. Shoot tips that were previously cryopreserved (see the “Citrus shoot tip cryopreservation” chapter) are recovered from liquid nitrogen and warmed.

First, the cryovial is removed from the cryotank in which it has been stored in liquid nitrogen (LN) vapor. Cryovials are stored on cryocanes in cryoboxes in the tank. The vial of interest in quickly removed from the cryocane and placed into LN and transferred to a dewar with LN in the laminar flow hood. This process is shown in Video 2.

Video 2. USDA-ARS Technician Remi Bonnart retrieves a cryovial from long-term storage in the vapor-phase of LN.

Within the laminar flow hood, the cryovial is opened and the aluminum foil strip containing the shoot tips is quickly transferred to a room-temperature (22 oC) Unloading Solution (1.2 M sucrose + 1/2 strength MS). The shoot tips are incubated in the unloading solution for 20 minutes at 22 oC. The solution is then removed and shoot tips are plated onto Citrus Shoot Tip Recovery Medium (Video 3). They remain on the medium for 18 hours at 25 oC in the dark before they are micrografted onto rootstocks.

4. Micrograft the shoot tips onto the rootstocks

The dissecting microscope is placed in a laminar flow hood and the stage is surface sterilized with 70% ethanol. Rootstocks are then retrieved from the test tubes and the root is trimmed to a length of 3 to 4 cm (Fig. 1). The hypocotyl is cut at a height of about 1 cm above the root (Fig. 1). The rootstock is prepared for micrografting by carefully cutting a small ledge on the hypocotyl, with a 2 mm deep incision made to bisect the cut surface, followed by a perpendicular cut from the edge of the seedling. Approximately 0.2 mm of the basal portion of the shoot tip is removed, and the shoot tip is then placed onto the rootstock ledge (Fig. 2). If needed, shoot tips are moistened with Shoot Tip Dip/Rinse Solution (3% sucrose + MS solution). The seedling rootstock with the shoot tip is then placed onto Citrus Micrograft Recovery Medium in 25 x 150 mm test tubes with 25 mL of medium per tube. The plant cultures are grown at 25 oC with ~100 µmol m-2 s-1 light provided by fluorescent bulbs with a 16 h photoperiod. Video 4 demonstrates these steps of the procedure. 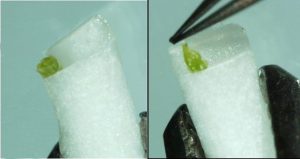 Micrografted plants are grown for several weeks and shoot tip regrowth will be visible. In some cases, lateral shoots grow from the rootstock. Those non-shoot tip derived shoots must be removed so that they do not compete with the elongating shoot tip and inhibit its growth. The following video (Video 5) and images (Fig. 3 and 4) shows citrus plants recovered 6 to 8 weeks after shoot tips have been micrografted. If lateral shoots are apparent, they are removed and the plants are returned to the test tubes, which is also demonstrated in the video. Regrowth data are usually collected after 6 to 8 weeks. Micrografted citrus plants may then be transferred and grown on soil (Fig. 5 and 6).

Video 5. USDA-ARS Technician Ashley Shepherd shows citrus plants recovered after micrografting the cryopreserved shoot tips and the process of trimming shoots that may grow directly from the rootstock and did not originate from the micrografted shoot tip (narrated by Remi Bonnart). 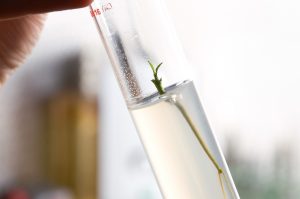 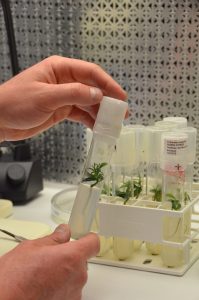 Figure 4. Shoot tips that have recovered into plants that could be transferred to the greenhouse. Photo credit: Gayle Volk. 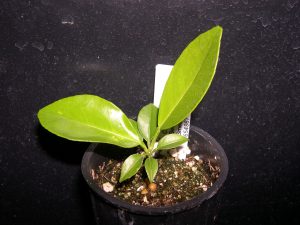 Figure 5. Micrografted citrus plant that has been been transferred to soil and grown in the greenhouse. Photo credit: Remi Bonnart. 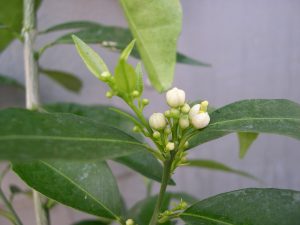 The citrus micrografting procedure is available to download here.

A large-scale citrus cryopreservation effort took place at NLGRP in 2016-2017. Reports were provided on the monthly progress of the project. A compilation of the monthly reports is available here.

This training module was made possible by:

USDA is an equal opportunity provider and employer. Mention of trade names or commercial products in this article is solely for the purpose of providing specific information and does not imply recommendation or endorsement by the US Department of Agriculture.

This work (Training in Plant Genetic Resources: Cryopreservation of Clonal Propagules by Gayle Volk) is free of known copyright restrictions.